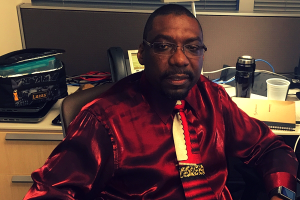 Our Bishop epitomizes such leader as Moses who seeks to listen to the directive of the Lord through the Holy Spirt. He believes it is crucially important to study the scriptures and develop men and women into orator prepared to carry the gospel to the near and the far by incorporating prayer, meditation, holiness as the Lord our God instructs.

Bishop St. Hylton  R. J Coombs began his Christian Journey at a very tender age in the Apostolic Pentecostal  movement. Apostolic Pentecostal movement was very firm on all activities that had to do with doctrine, church-life, individual commitment and Christian life; notwithstanding, he was attentive to the teachings and doctrines of the faith which was compulsory for people of that day. Church was a part of the community where every child was mandated to attend Sunday school and participate in religious rituals at home and school. He did not allow the stern teachings to subjugate his mind in making the decision of becoming a member of the movement, but he could have recalled that there was an emptiness that needs to be filled; he tried politics, smoking and living life carelessly in the world of sin but nothing could have satisfied that emptiness. On Sunday April 13th, 1979, the light suddenly came on he was sitting alone into a desert place where he heard the voice of God spoke to him, saying get up, leave now, go over to the church and give your life to me. He frantically looks around him there was no other person standing away from him. Immediately he moved in obedience, went and got dress and went over to The Waterloo Apostolic Pentecostal Church.  While in attendance a contrite essence came over him and he surrender to God’s call became broken down with emotions, fear and hopefulness. At the end of that service the Pastor I. W Evans extended an invitation to the congregation, asking if there are any one here willing to give the hearts to the Lord He was the first person to heed to that call of the minister went in submission He immediately requested to be baptized that same Sunday morning.

Any cookies that may not be particularly necessary for the website to function and is used specifically to collect user personal data via analytics, ads, other embedded contents are termed as non-necessary cookies. It is mandatory to procure user consent prior to running these cookies on your website.